Peaceful protester and media-activist in Aleppo

As many did in 2011, Zaid Muhammad joined the Syrian revolution against Assad state of injustice and oppression as a peaceful protester and media activist. He is a Palestinian refugee who was born and has lived in Aleppo until 2016. At the time he was a university student at Aleppo University.

Because of his activism, he was detained by Assad intelligence forces. ‘I survived the detention, but tens of thousands didn’t.’ he says.

After the armed resistance entered Aleppo in 2012, he covered the peaceful activism in addition to the war on Syrians, and worked as a freelance photojournalist.

In 2013, Zaid joined Kesh Malek (Checkmate), a Syrian Civil Society Organization which was born as a part of the revolutionary movement in 2011, whichbelieves that the Syrian revolution is the way to bring a radical change in Syria that will shift the state from a totalitarian rule to a democratic state that has no place for dictatorship, and which is respectful to its citizens and will achieve justice and freedom. He became a board member, co-founder of its Education Program and held the Education Program Manager position for two years. 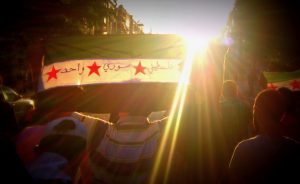 Zaid took this photo during a peaceful demonstration in Aleppo city. The flag combines both Syrian revolution and Palestinian flags, the text says ‘Palestinians and Syrian are one’. He believes this slogan represents his identity as he is committed to the Palestinian and Syrian struggle towards Freedom, Justice and Dignity.