Mazen Abou Hamdan is a Lebanese civil rights activist and former president of CHAML (Nonviolent Non-sectarian Lebanese Youth). He is also a spokesperson of the ‘Academic University of Non-violence and Human Rights in the Arab World’ (AUNOHR), in which he has completed a Master’s degree in the “Philosophy & Strategies of Non Violence”. 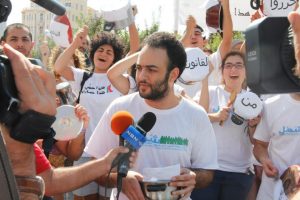 Mazen has been highly involved in the struggle to legalize civil marriage in Lebanon and has worked extensively on projects related to nonviolent strategies for social change, human rights education, and conflict resolution in Lebanon and the MENA (Middle East & North Africa) region. He is also a leading trainer on street tactics of nonviolent direct action. 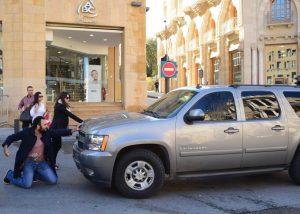 This picture portrays a nonviolent confrontation; it was taken during a confrontation named ‘tomato revolution’ in which civil society activists tried to stop Members of Parliament from voting for an illegitimate extension of their mandate (that is to cancel the parliamentary elections) and we tried to physically squat in front of their vehicles. Eggs & tomatoes were devised as ‘nonviolent weapons’.

You can read and/or download the publication “Yes to Resistance. No to Violence. (Beirut 2015)” from Walid Slaybi, one of the founders of AUNOHR.